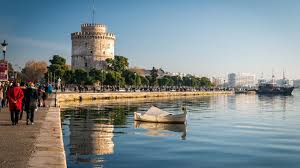 Thesaloniki Thessaloniki It is the largest Prefecture of Northern Greece with its beautiful capital Thessaloniki.It consists of many Municipalities and Communities and it also has wonderful and unique locations like most of our Prefectures.
Who has not heard of the seaside Kalamaria, Thermaikos, Pylaia and Panorama with its magnificent view?Well known and long-awaited, Thessaloniki is considered an ideal destination for all seasons and for all tastes.
It is a fertile land, lying harmoniously around the rivers Axio, French and Ludia, the lakes Volvi and Koroneia and of course the sea of ​​Thermaikos and Strymonikos Gulf. It has monuments from all historical periods, from Byzantine churches to castles and various archaeological exhibits.
In the center of the city stands the imposing White Tower, a trademark of the entire Prefecture and a symbol of pride and culture for the whole country. It was built in 1500 AD. about and was part of the defense for the city. Inside, you will admire a magnificent collection of Byzantine exhibits of the city. Continuing your tour you will come across the famous Galara Arch of Galerius with the relief representations that are a Roman building. Kamara is located on the north side of Egnatia Road.A short distance away is Rotonda, a circular building with a hemispherical dome built in the early 4th century AD. and today it is mainly used as an exhibition space. Of great historical importance are the Byzantine churches, most famously the Church of Saint Demetrius, who is also the patron saint. Built in the 7th century and undergoing various hardships and plunder over the years it managed to "survive" and was declared a UNESCO World Heritage Site.Then there are the magnificent Hagia Sophia, the Virgin of the Chalkeans, St. Andrew, the Transfiguration of the Savior in Chortiatis and many more admirable churches. Get to know them one by one and discover the historical wealth that goes back centuries.During your varied and fascinating stay, visit the Archaeological Museum with collections of prehistoric, Roman and classical finds, the Museum of Byzantine Culture with exhibits of early Christian times, the Museum of History and Art of the White House and the Modern White House but.You will be very lucky if you visit one of the events held each year during your visit.Some of them are the International Theater Festival, the Chamber Music Festival, Demetrias, the Film and Book Festival and many popular folklore events.On May 21, the custom of firing in Lagadas, the Carnival dance of the Trojans in Soho, with "bells" dancing on the streets and masquerades in Nymphopetra on New Year's Eve.